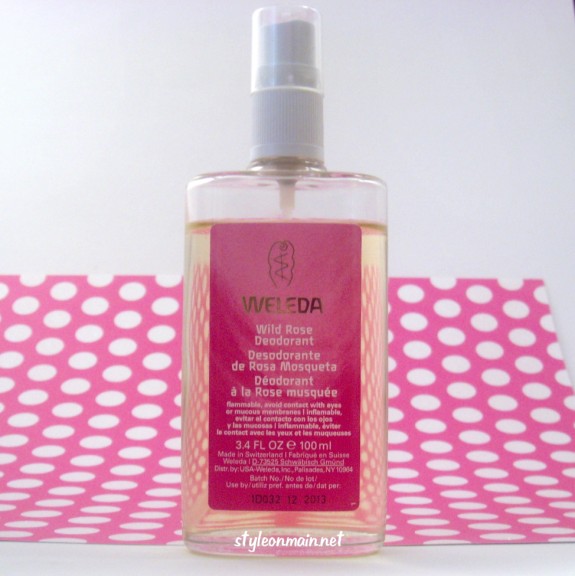 I had been a solid deodorant kind of girl, and went to a roll on.  That helped, but I would still have occasional flare-ups.  I tried not wearing deodorant every day.  While it was a good idea in theory, in practicality, it didn’t work so well.  I moved on to the natural deodorants. Doing this, I ran into one of two issues – they either worked and caused a reaction, or they didn’t work that well.  While there were a couple that did work, and I didn’t have a reaction to, they were very messy to use.  I guess you can’t have it all.

I needed something that worked, and didn’t cause me to have a reaction.  Enter Weleda’s Wild Rose natural deodorant.  At first, I was a little hesitant.  I mean, come on.  It looks like a bottle of perfume and has a sprayer on top.  Like this is really going to be an effective deodorant.

I decided to give it a try.  I mean, what did I have to lose?  I had tried other Weleda products, and liked them, so why not?  The first day I tried it, I sprayed one burst under each arm.  The Wild Rose Deodorant dried pretty quickly, and I was ready to go.  I didn’t notice any type of b.o. emanating from me.  The next week, we had a serious heat wave.  I mean, temperatures were in the mid 80’s!  I was starting to notice a little bit of b.o., so I upped it to two bursts under each arm.  That totally killed the stench. 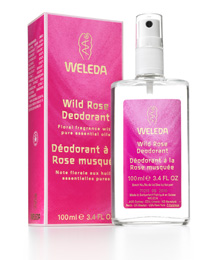 Weleda’s Wild Rose Deodorant doesn’t just cover the odor, though.  It neutralizes it.  Stops it dead in it’s tracks.  And while it has a light floral scent, it’s not like some deodorants where every time you start to perspire, they release an assault of whatever their scent is.  Nope, this just leaves a light, fresh scent.

Another great thing is no more white deodorant residue all over your clothes.  I hate that, and it’s so difficult to get out!

I find that the two bursts last me throughout the day.  If I am going somewhere after work, like a meeting or happy hour, and not making a trip home first, I will apply another spray before heading out.  Better safe than sorry.

I received sample products for review purposes only.  No other compensation was received.  All opinions are my own.

« All Natural Skincare with Primavera
How To Wear Green Eyeshadow Tutorial »